In December, Greenbelt completed the process to establish six conservation restrictions in Peabody, all owned by the City, and all unique in their own way.

A conservation restriction (CR) ensures these lands will be forever protected as open space.

Among the land conserved was Tillie's Farm, a 16-acre farm within the South Peabody community. Since 1940, Tillie’s Farm has had the mission of providing local, healthy and seasonal produce using sustainable farming practices.

The family of Marian Newhall, better known as Tillie, had an established wholesale business selling fruits and vegetables. She wanted to offer these and other locally grown products to her neighbors and the local community. 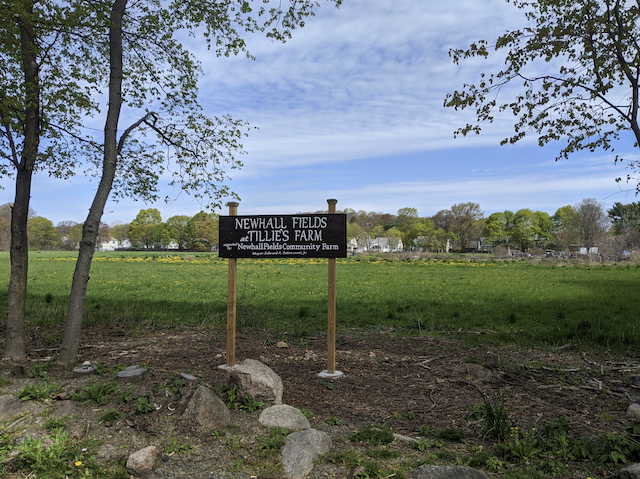 The City of Peabody runs a farm stand in the front, and the 2-acre back field is used by Newhall Fields Community Farm, a non-profit group growing produce with community volunteers. Over 300 volunteers produce thousands of pounds of food each year.

Also conserved was Scouting Woods, 11 acres containing both an actively used professional disc golf course, and a substantial green infrastructure bioretention basin/wetland, which was built by the City to reduce flooding.

Greenbelt now also holds a CR on an extension of the Independence Greenway rail trail, which currently stops at Route 128. The CR covers the new extension of the rail trail, which the City is actively working to turn into a functioning bikeway to allow users to go from the Ipswich River on the border with Middleton and into downtown Peabody, passing conservation land along the way.

“The City is excited to partner with Essex County Greenbelt to protect these valuable open space properties,” said Brendan Callahan, Assistant Director of Planning. “The City was able to purchase these properties with our Community Preservation Act funds. Conservation of undeveloped land in Peabody with open space benefits are important for Peabody residents and utilizing our CPA funds allows the community to invest in itself."

The other CRs cover woodlands, open space, and a neighborhood memorial park for the three Peabody victims lost in the terrorist attacks of September 11, 2001.

“Many community members in Peabody expressed excitement to have Greenbelt involved and I hope we can continue to work with them on future projects,” said Brown.