Compelling aerial imagery gave residents of Essex County coastal communities a look at the impact of sea level rise, at a special presentation hosted by Greenbelt and Salem State University earlier this month. 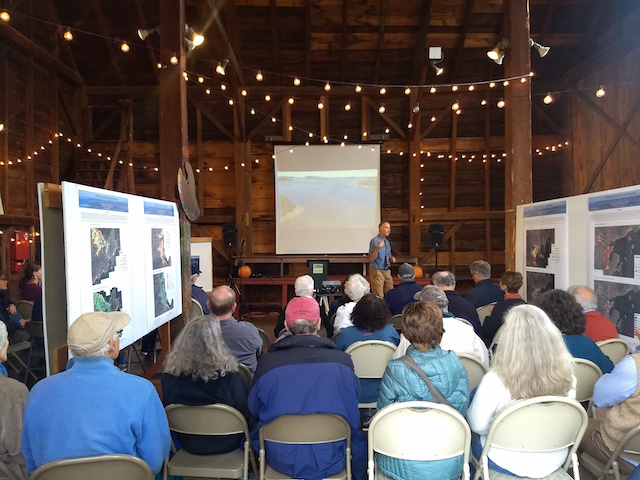 Using satellite imagery and other data, the Salem State University researchers showed how just a one-foot rise in sea level would bring flooding – ranging from minor to severe – to every coastal community in Essex County.

The sea would cover 4,500 acres in Newbury, 2,750 in Salisbury and 4,200 in Ipswich, according to pioneering and groundbreaking mapping techniques developed by Dr. Young.

Scenarios showing three or five-foot rises in sea level would bringing even more flooding to cities and towns along the coast.

The large group attending the presentation was keenly interested in marsh migration, where tidal marshes will shift inland to land that is now dry. They saw the Salem State scenarios where future flooding will occur and that land will be under water.

There was also great interest in how local government can engage on the issue of climate change, as the analysis provided a visual tool for municipal planners to use when considering the siting of infrastructure, planning evacuation routes and taking steps toward improving climate-readiness and coastal resiliency.

The exhibit, at the Cox Reservation in Essex, will remain open to the public weekdays until Oct. 18 between 9 a.m. and 5 p.m. Backyard Birding: What to Expect Now at a Feeder