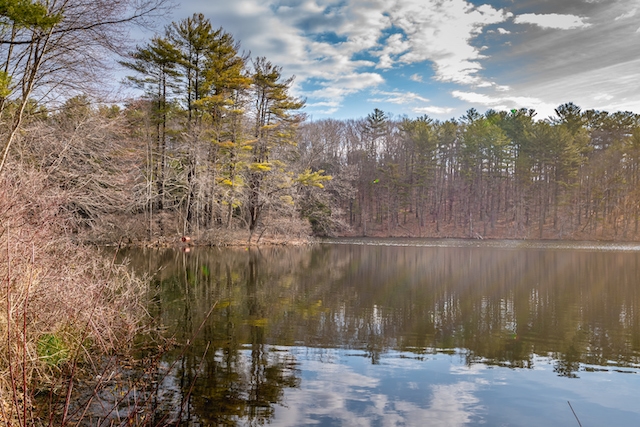 The Artichoke River was named for the explorer Samuel de Champlain’s 1603 account of sunflower tubers. Champlain wrote that they tasted like artichokes. The sunflowers, native to New England, were being cultivated by the Indigenous horticulturalists who lived here, who used the sunflower seeds as well as its tubers.

They were also growing corn, squash, beans, and tobacco in their gardens. Puritan settlers, believing they were building a new holy land, later named the sunflower tubers Jerusalem Artichokes and gave the Merrimack tributary its name.

The history of deeded land along the Artichoke River dates back to the earliest colonial settlers in what is now West Newbury.

In 1635, 23 men and their families sailed through Plum Island Sound and up the Parker River landing in Newbury. As more settlers arrived, land in Newbury became scare and some, including Edward Rawson, John Emery and Francis Brown, moved westward to the Artichoke River. Town records show that parcels of land around the river were granted beginning in 1638.

The current landowner, Preston Rogers, traces his family’s history to 1883 when his great-grandfather purchased 50 acres that included a 1738 farmhouse.

“One of his sons, my grandfather, lived in the house with his wife and raised three children including my father,” said Rogers.

“My grandfather had a small Guernsey dairy farm, and before Middle Street became paved and became a muddy springtime quagmire, he could be found towing cars out of the mud to get them going again.”

Read about Greenbelt's success in protecting 38 acres along the Artichoke River.

Amid the mature forests of pine, oak, hickory and juniper trees are about a mile of well-preserved stone walls.

“Most of these walls were constructed in the mid-1800s to fence in cattle,” said Rogers. “Proof of this is an 1851 half cent that was uncovered at the bottom of a wall that my father and I were making a passageway through in 1959.”

As a teenager, Rogers, like his grandfather, had a small Guernsey farm and part of the 38 acres Greenbelt is looking to preserve was used as a summer pasture.

The land now teems with wildlife.

“Over the years I have seen much wildlife in these woods including red fox, gray fox, deer, turkeys, fishers, bobcats, weasels, mink, many kinds of owls, wood ducks, pileated woodpeckers, and coyotes,” Rogers said.

For the last 30, years the land has been in the Massachusetts Chapter 61 Forestry program used by landowners interested in forest management.

“There has been one major logging which had the side benefit of creating many trails, most of which have been well-maintained” said Rogers.

Those are trails Greenbelt will preserve and maintain.