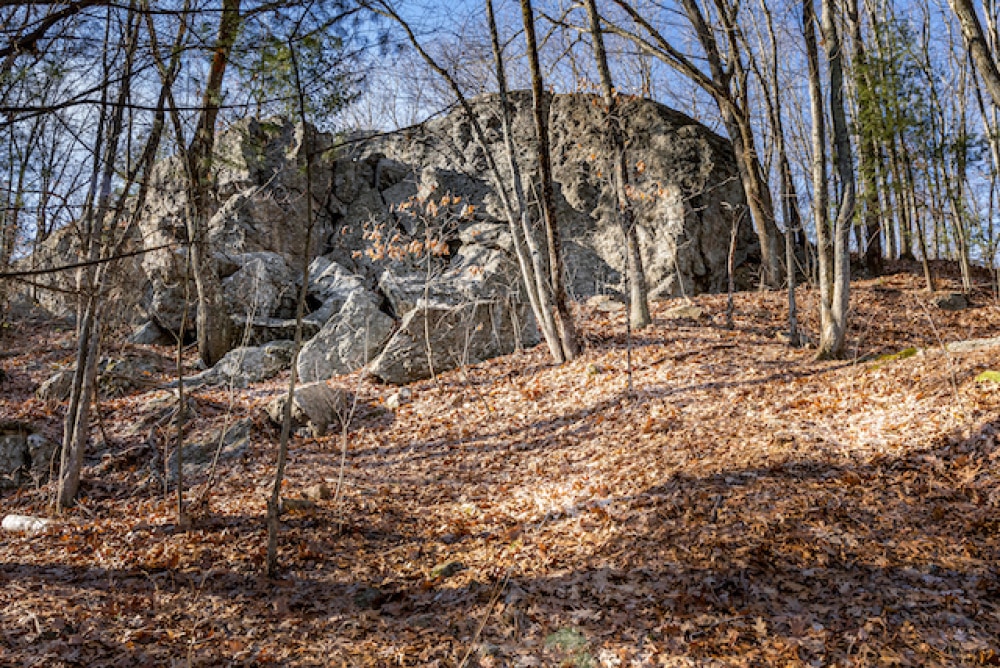 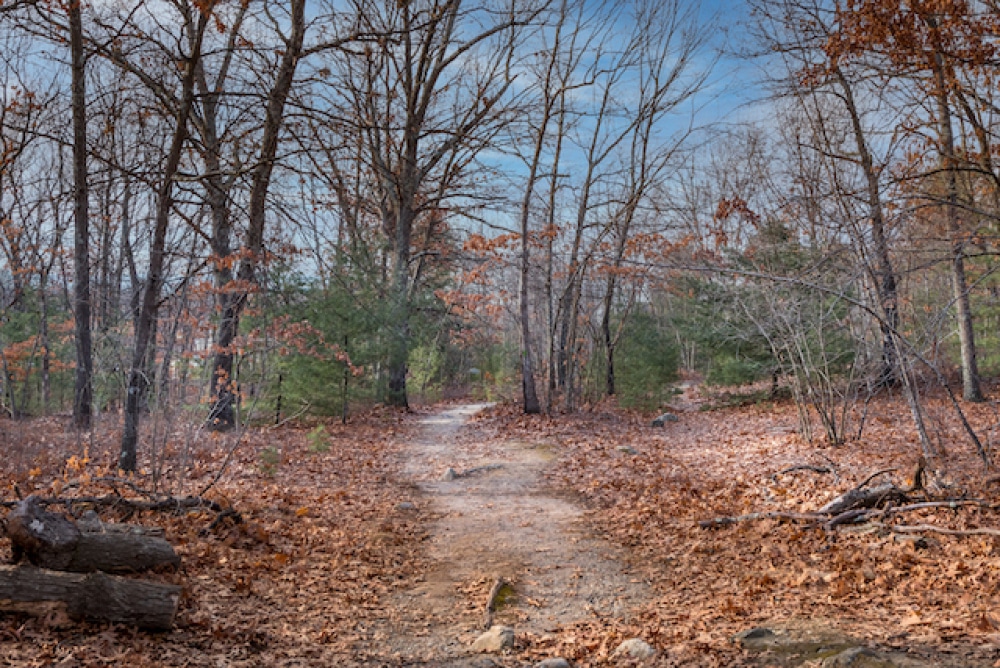 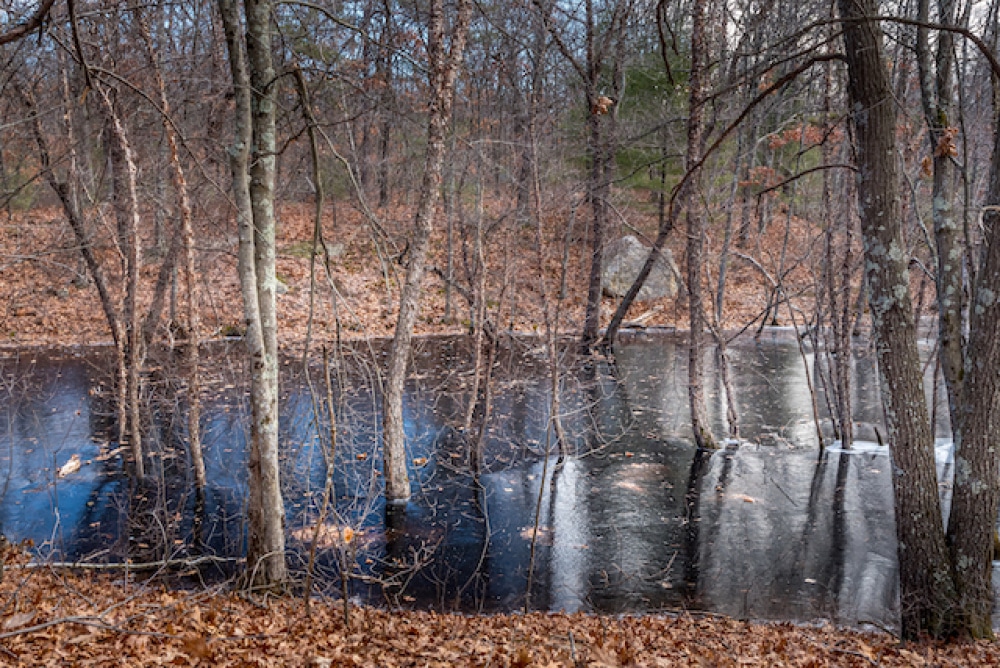 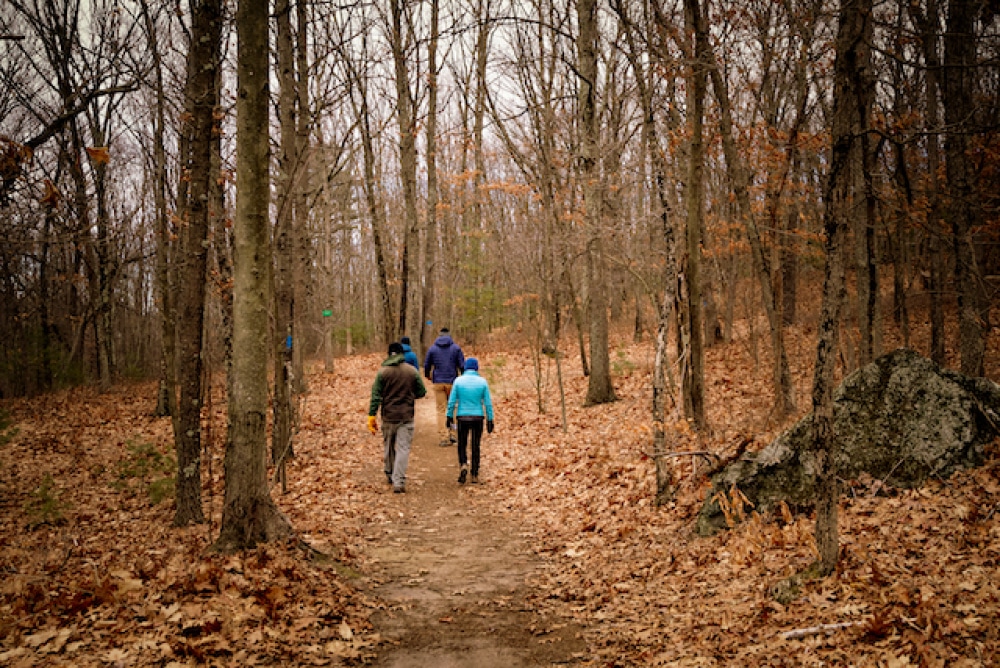 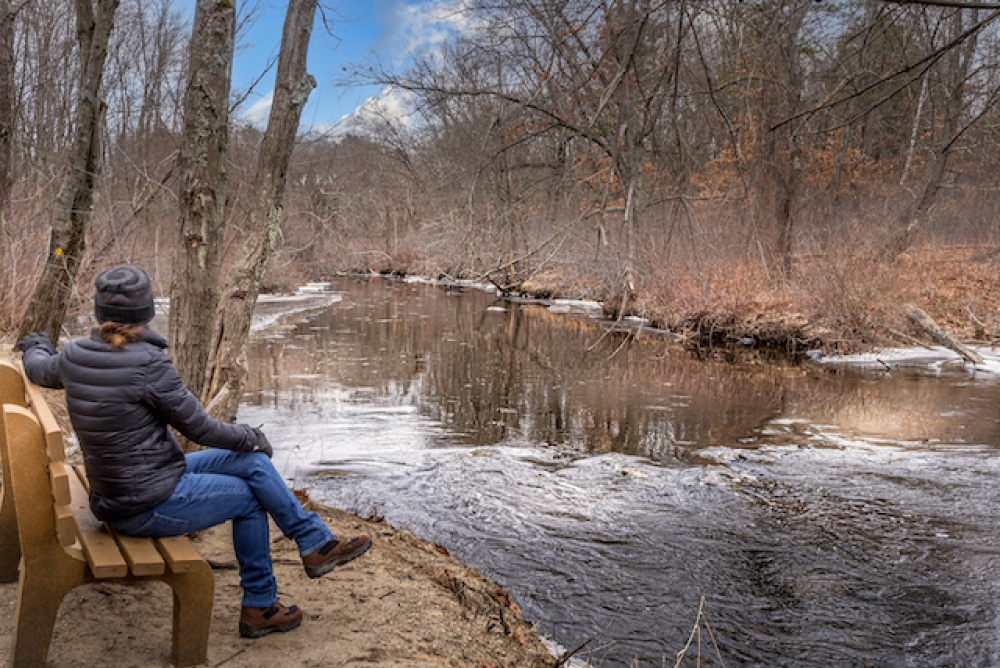 Den Rock itself is a massive granite rock formation located on the border of Andover and Lawrence, a popular spot for rock climbers.

Den Rock and other glacial erratic boulders and caves in this park had spiritual significance to Indigenous people living in the Shawsheen Valley. The park encompasses a ceremonial stone landscape and occupation sites spanning millennia. Fire-blackened quartz indicates its small caves could have been used for shelter and food storage.

The area offers a rich diversity of subsistence resources from riverine, wetland, and forest biomes.

The area was also important for Indigenous mining and quarrying industries. As early as 8,000 years ago Maritime Archaic people were quarrying soapstone from outcrops and along the banks of the Shawsheen’s tributaries. Den Rock Park lies in a geologic formation called the Nasoba Traverse, with deposits of volcanic rocks such as basalt, granite, and diorite, and minerals such as quartz and calcite.

Later Eastern Woodland people used ground quartz to temper their pottery and mined chalcopyrite, pyrite, and galena—forms of lead used in fire-making. The colonists later quarried serpentine rock from the mines and used the ancient excavations as lime kilns. At the time of European contact, the Shawsheen was a Pawtucket canoe route to the Merrimack, where they gathered to fish at Pawtucket Falls in the spring.

Over 1,000 shards of pottery were discovered during archaeological excavations decades ago. Glass and iron gun parts in the area are likely remnants of the early European settlers, according to the Massachusetts Archaeological Society.

Purchased in 1877 for a cemetery but then changed into a city park in 1896, Den Rock was improved in the 1930s by workers with the Civilian Conservation Corps who installed rock steps, two amphitheaters, a boardwalk, and numerous trails.

For bird-watchers, the trails offer opportunities to observe an abundance of both migratory and resident bird species in the park, including many spring warblers, many woodpeckers, herons and egrets in the wetlands, belted kingfishers, and birds of prey like the red-tailed hawk.

A variety of woodland animals also call the park their home, including deer, fox, fisher, coyotes, beavers, and racoons.

Native tree species include white and red oak, gray birch, scotch and white pine, poplars, and red maples. The wetlands and Shawsheen River banks are home to cat-tails and many rushes and sedges.

In December 2020, Greenbelt acquired 48 acres in Andover and Lawrence from the Merrimack River Watershed Council (MRWC).

MRWC had owned and managed the land since 1999, and we're grateful for their stewardship.

Greenbelt's ownership of the land brings the resources and experience of the organization to bear on a significant community resource. We look forward to working with local partners, including Groundwork Lawrence, the City of Lawrence, the Andover Village Improvement Society (AVIS) and other groups.

We encourage you to visit the Groundwork Lawrence website for a comprehensive description of Den Rock Park's history, trails and natural resources.

The main, city-owned entrance is near 341 Winthrop Avenue (Opens in Google Maps) (Route 114), Lawrence, where there is ample parking, an informational kiosk, and direct access to Den Rock Park and the trail network maintained by the City and Groundwork Lawrence.

There is a second entrance at 38 Stirling Street, (Opens in Google Maps) Andover, with limited on-street parking and direct access to Greenbelt’s trails.

The main entrance is on Route 114 (Exit 100A off Route 495) directly across from the Market Basket. There is ample parking for about a dozen cars.