Many are so attractive, others so widespread that we may not realize that dozens of plants common to Massachusetts are one of the greatest natural threats in the state. 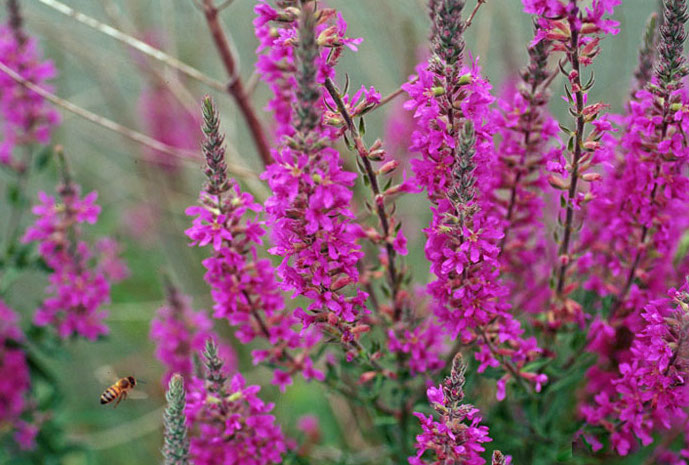 Many were brought into the state deliberately, others were “hitchhikers” on imports from other countries.

“They are one of the greatest threats to the nature of Massachusetts,” according to MassAudubon, because they out-compete, displace, or kill native species.

Purple Loosestrife is commonly seen in wetlands along roadways. A single plant can produce a million or more seeds that are spread by waterfowl.

During the winter holidays, many use Oriental bittersweet to decorate their homes. Bittersweet can grow over and even kill mature trees by strangling them. Birds eat and carry away the berries from wreaths, and the digested seeds grow where they are deposited.

(How to tell the difference between Oriental and American Bittersweet.)

The Norway maple is common in woodlands and grows in both full sun and full shade. They can form dense stands and crowd out native vegetation, including Sugar maple.

The four are among almost 70 plant species identified by the Massachusetts Invasive Plant Advisory Group. All have been banned for sale and importation into the state.

Every Greenbelt reservation has, at minimum, one invasive species. On average, there are three to five, and at some properties invasive plants are the dominant species type.

At the Allyn Cox Reservation in Essex, Oriental bittersweet, Honeysuckle, Swallow wort, Common buckthorn, and Garlic mustard are among the invasive species found.

At the John J. Donovan Reservation and Sagamore Hill Conservation Area in Hamilton and Essex, Barberry and Porcelain berry are found.

Water chestnuts at common at the Arthur Ewell Reservation in Rowley, and at Pingree Woodland in Hamilton, it’s Glossy buckthorn and Knotweed.

Removing these invasives is constant work for the Greenbelt Stewardship Department.

Woodland Acres, in Rockport, however, is unique. The practice of sheep grazing left it mostly deforested, and because the abandonment of the sheep industry came before the time of non-native invasive species that we know today, revegetation came back in the form of pitch pines and native shrubs, making it an unusual example of native regeneration.