Clean Cut: The Basics of Pruning 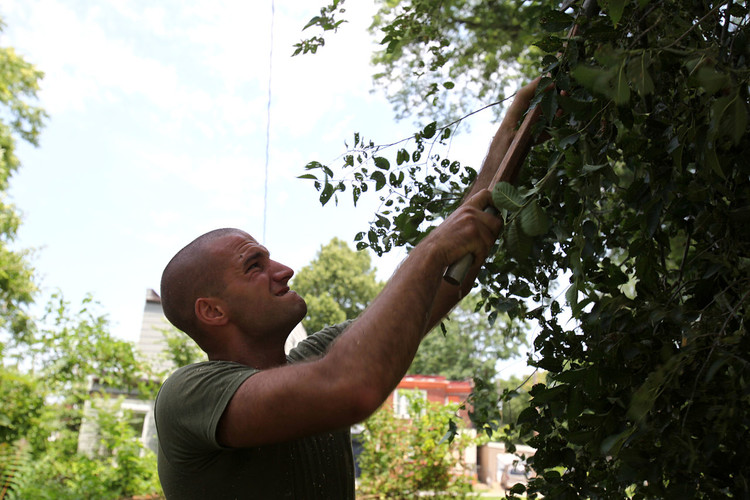 Simple things are often the most telling. Take, for example, the act of pruning a branch from a tree. Elmer Foy, the first Director of Mass. Audubon's Ipswich River Sanctuary, transformed the simple act of pruning into an art.

For years he made simple, clean cuts with a discerning eye for natural growth and form. His whetted saws and honed shears, both well oiled, helped him work effortlessly. He always produced clean scars ideal for healing.

While not all of us can match Elmer's level of skill and experience, we can emulate the kind of thought and caring he brought to his work. Whether you are helping to clear a trail, or just pruning around the house, keep the following basics in mind.

First: you need sharp tools. I don't know how many pruning hand saws I have seen languishing in people's garages because they are as dull as a hoe. With the proper file, anyone can sharpen shears, snap-cuts, loppers and saws.

For small crescent-shaped hand saws or pole saws, buy yourself a triangular file which is made for the number of saw-teeth per inch of your blade (normally 6-8).

Clamp the blade in a vise and start filing (most filing is done perpendicular to the blade), skipping every other tooth. Then flip the saw around to do the remaining teeth from that side. There is a nice little book put out by Harper and Row called "Guide to Sharpening" by Harry Walton (which can still be purchased used online) which will tell you everything you need to know about setting the teeth and jointing, among other things.

There are two types of pruning shears: one has a hook and a corresponding curved blade which shears the branch as the cutting blade moves by the hook.

Use a flat file to keep the cutting blade sharp. Maintain the shearing surface on the hook by filing with a half-round file perpendicular to the cutting action. The other type of pruning shear is an Anvil-style cutter or snap-cut. These blades should also be filed as necessary to maintain a keen edge. The soft-metaled anvil may need replacing if it becomes too worn down.

Once your tools are sharp, keep them clean and well-oiled. Turpentine and steel wool will help remove built-up sap. A little Vaseline on the sawblade and shearing blades will reduce sap build-up as well as the amount of effort needed for cutting.

When your tools are in tip-top condition, you're ready to prune a limb. For large limbs, make three cuts with a saw (see diagram). When using cutters; or shears to remove a branch, cut at the point of branching and remove it flush to the trunk or other branch. 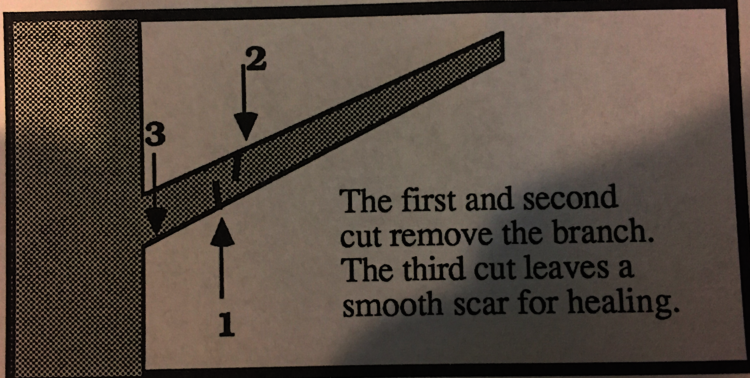 The whole idea is to create a clean cut that will heal properly, look nice, and won't poke someone's eye out as they walk by. If you must remove an entire sapling or shrub, make cuts flush with the ground. Stumbling over stubble on a trail is not fun, and the consequences of falling on a little 12-inch-tall sapling stubble could be - well, quite painful at best.

Now, a little extra thought is what elevates pruning to an art form. When pruning, keep track of what you are leaving on a tree or shrub. If you leave a bud at the top of a branch, it will grow a new branch out and up from that point.

Think about which direction the bud is going to grow. Is that where you want a branch to be? What will the tree look like as it grows?

If you want the tree to grow away from the trail you are clearing, at least make sure the branches and terminal buds you leave are not on the trail side of a branch. It will save a lot of work in the future.

To sum up, the three essentials of successful pruning are clean, sharp tools, knowing how a tree grows and cutting at the point of branching. The rewards of a little extra care are healthy, attractive limbs and trees, and a safe, enjoyable trail.

(This article was originally published by Greenbelt in 1989.)